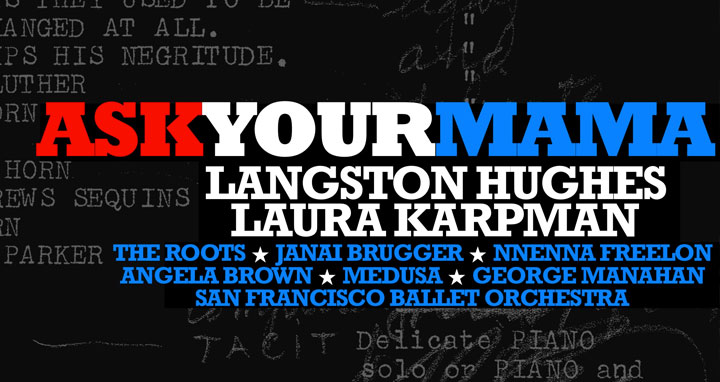 Epic poetry set to powerful music, brought to life by a cast of legendary performers: ASK YOUR MAMA is an original musical setting by four-time Emmy Award-winning composer Laura Karpman of the 1961 masterpiece by Langston Hughes, delivered with majesty and magnetism by sopranos Janai Brugger and Angela Brown, hip-hop innovators The Roots and Medusa, jazz vocalist Nnenna Freelon and others, conducted by Grammy-nominated George Manahan.

Ask Your Mama: 12 Moods For Jazz is the most modernist, defiant work by Langston Hughes, an icon of the Harlem Renaissance known as the pre-eminent voice of the African-American experience. It gives voice to the outrages and the joys of African-American life through the eyes of a child and the man he becomes, alternating between the fury of indignation and wild comedy, taking us on an odyssey from Africa to the Americas, high art to low art, from south to north, from cities to suburbs, from opera to jazz – and in Hughes’ own words, “from shadows to fire.” Hughes conceived his epic 12-part poem as an interdisciplinary creation, including in the margins suggestions for types of music including hot jazz, German lieder, cha-cha, patriotic songs, post-bop, Arabic and more.

ASK YOUR MAMA premiered to a sold-out Carnegie Hall in 2009 and has since played from Harlem’s Apollo Theater to the Hollywood Bowl, and has reached millions more through media coverage by National Public Radio, PBS, NBC TV, The New Yorker and the Huffington Post. The release appropriately comes in the wake of Independence Day: as Hughes says in his poem, “your country is your mama.”